Our Endangered Species: A Hard Look At How We Treat Children 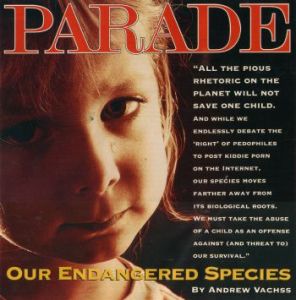 This article is almost 17 years old, but I remember the day I read it in 1998, in The Los Angeles Times (Parade) Magazine. It was only a few months after I remembered my father had sexually abused, raped, and psychologically tortured me for ten years, but the article is still very powerful and timely for all victims of child rape, incest, as well as victims of mothers who don’t protect their young.

“Years ago, I was in the middle of a hotly contested trial, representing an infant who had been so tortured that the testifying pediatric expert said the baby actually appeared “suicidal” even at such a young age. One of the opposing attorneys argued for the return of the child, saying his client was the “natural mother” and had certain rights. There was nothing “natural” about the “mothering” this baby boy had received. He would have been better off in a P.O.W. camp. And I began to reflect on how even biology has failed some children, how our human species no longer practiced the lessons of our predecessors. I wondered, even then, if it was too late for us. I do not believe it is—but I do believe we are running out of time.

Although we all believe our human species to be the highest point on the evolutionary scale, there is one critical area in which we have failed to evolve, one area in which we do not represent an improvement upon our predecessors. And this is a failure so fundamental, so critical, that our long-term survival is at stake. Ultimately, it poses a greater threat than war, poverty, hunger, crime, racism and tribalism—even of the genocidal variety—combined.

That fundamental failure is this: We are not protecting and preserving our own. Our notion of the human “family” as the safeguard of our species has not evolved. Instead, it has gone in the opposite direction—it has devolved.

One distinguishing characteristic of highly evolved species is a long period of postnatal helplessness, when offspring are not able to fend for themselves. Another characteristic is pack behavior, a collectiveness which requires that all activity be geared to the ultimate survival of the group.

Among other mammals, non-protective parents are considered defective by other pack members. Not only will they decrease the pack’s numbers through direct attacks on their own young, but they also cannot be relied upon to guard the offspring of others while pack members forage, hunt or gather. And so they are expelled. Likewise, predators within a species are not tolerated. They are banished, avoided or killed. These are not moral judgements; they are biologically driven and, among all species but our own, compelling.

Human animals, by contrast, have tolerated—even tacitly condoned—the non-protector and the predator, leading to an escalation of the rape, murder and torture of our children. Rather than making their survival, and the survival of our species, an unquestioned priority, we watch indifferently while the evolution of cruelty continues. Much of it comes from the individual family itself; all of it from the human family as a whole.

Instead of blaming the “destruction of the family” for every social ill and evil, we need to face the fact that this is a self-inflicted wound. The “family” is self-destructing—destroying itself from within by its failure to nurture and value its offspring. What are “family values” anyway? Unless and until the ultimate “family value” is protection of our children, such a term deserves no respect.

We are not winning this race. And we cannot, unless and until we change our priorities and our conduct. All the pious rhetoric on the planet will not save one child.

We must take the abuse of a child as an offense against (and threat to) our survival. And we must replicate the conduct of our animal ancestors and respond as they did—or fail to do so and vanish as some of them did. Forever. 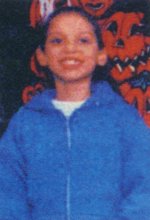 Justina Morales was killed by her mother’s boyfriend while her mother held the little girl’s hand on December 31, 1995, in New York City. The two then dumped the 8-year-old’s body in a vacant lot.

Those not given such love as children seek it throughout their adult lives—some in ways very dangerous to themselves and to others. But unconditional love can never be received by adults. It can only be given. All love between adults is conditional. It requires behavior; it must be earned and maintained.

I once represented a child who had been horribly tortured by her “mother.” On the witness stand, the abuser explained why she had burned the child by holding her little hand against a hot stove grid: “She wouldn’t leave me alone!” The child’s crime was to follow her mother around the house, attempting to wring from her the love she so desperately needed. Slaps and kicks did not stop the child’s search for love, so the “mother” decided more extreme measures were needed to “teach her a lesson.” Too many of our children are being taught that same lesson, in a variety of hideous ways. And yet our tolerance continues.

Here’s what I tell so many formerly abused children who are now adults: Look how desperately you wanted to bond with “parents” who would not love you. That is not a defect; indeed, it can be a strength. It proves that the ability to love has not been eradicated in you. But you must choose carefully. Test, establish criteria, search—and resolve to be alone if you cannot find what you deserve. Bonding, in and of itself, is of no value unless the current flows in both directions.

When our biological families no longer function, the only option is to create a family of choice—a family defined by shared purpose and mutual respect, not ties of blood. When, as an adult, you can adopt a child-protective pack mentality, you can bond with others and have the family you need.

Why it Takes a Village To Rape a Child

A classic illustration of devolution is our laws against incest. What is the difference between sex with a child of another and a child of one’s own? We all know—and the data prove—the truth. When a male (note: I do not say a “man”) has sex with a neighbor’s child, prison is a likely possibility. But should such a creature have sex with his own child, we euphemistically deem it “family dysfunction” and call in the therapists.

Incest laws were enacted to prevent the birth of biogenetic defectives. But why do such laws apply to children? Children do not have the biological capacity to reproduce. Laws prohibiting sex or marriage between closely related adults protect the species. But incest prohibition as to children has no such value.

Simply put, we as a nation consider children to be the property of their parents. And we provide a special immunity to sex offenders who grow their own victims. Which is more destructive to our species: the random sexual assault of a child or the sexual assault of a child by the very individual whom all laws command to protect that child? What is the moral, social or ethical justification from distinguishing sexual assault by blood relationship of the victim to the perpetrator? We can come to but one conclusion: The laws against incest exist not to protect children but to protect predators.

Yes, our human race remains the only one that tolerates non-protective parents and same-species predators. The incest laws make that point, written in the blood of innocents. This is the question about incest laws for every legislator in the land: Explain it or change it. And unless we, as a society, start asking that question, we will continue our “evolution” until we have lost our humanity.”

3 Responses to Our Endangered Species: A Hard Look At How We Treat Children